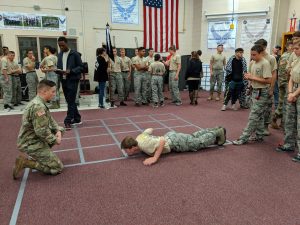 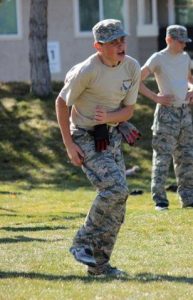 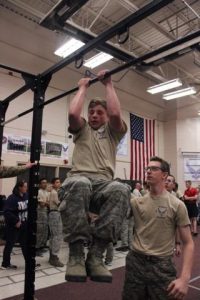 The competition on Saturday started out with each team having to do as many push-ups and pull-ups as possible in 5 minutes. Then they moved to the rope bridge where they had to tie their own rope harnesses and then make their way across without touching the ground or stepping over the penalty markers. Their next challenge might have been the hardest part which was running a 5K route with 20 pounds of weight on their backs. The cadets encouraged each other and even carried someone else’s pack if needed. After running most of the 5K and facing physical and mental fatigue, the cadets had to complete specific obstacles: throwing a 20lb medicine ball 200 meters as a team, tie 3 different types of knots in 2 minutes, and flip a tire 60 meters. The last event was the Army Combat Fitness Test: each cadet had to sprint, drag a 45lb sled, carry two 20 lb kettle balls then sprint again…each time doing it for 50 meters. The cadets did an outstanding job: Team A finished in 1 hour and 9 minutes, while Team B finished in 1 hour and 22 minutes. “Cadets pushed their limits physically and mentally and worked impressively as a team,” said Cadet Hanna Farra, the Raider Team Commander. “I am especially proud of their sportsmanship they showed, cheering on their teammates and opposing teams. We were close to placing and have high hoped for the next competition.” 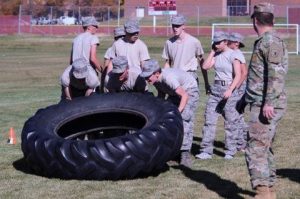 Way to represent Wasatch High School. Good luck on your next competition on Nov 16th.