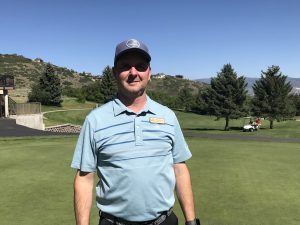 Chris Stover has been hired as the Head Boys and Girls Golf Coach at Wasatch High School.

His background in golf reaches back to his high school days at Springville High where he played golf as both a Junior and Senior earning Most Improved and Most Valuable honors respectively in those years.

After graduation from high school Chris put golf on hold to serve as a missionary for the Church of Jesus Christ of Latter-day Saints in the Honduras, Tegucigalpa Mission. Upon returning from his mission he walked on at Southern Utah University to play golf. In that same year, he earned a scholarship to play which spring boarded his college and professional golf career.

Upon graduation from SUU, Chris spent 9 years as an Assistant Golf Professional in the St. George, Utah area. Beginning with Sunbrook Golf Club, then moving to Southgate Golf Course, and ending at the Bloomington Country Club.

In 2005 Chris took his first job as a Head Golf at Palisade State Park Golf Course in Sterling, Utah. He worked hard at developing a junior golf program that helped him produce 6 region titles and two state titles as the coach of Manti High Boys Golf Team. In his last year at Palisade he started the girls golf program at Manti High School.

In addition to his job at Wasatch Mountain State Park Golf Course, Chris has served as the President of the Utah Section PGA, and as a member of the Youth Player Development Committee for the PGA of America, as well as one of 8 PGA Members on the PGA Junior League Member Taskforce that has helped shape the most successful junior program in the history PGA of America.

Chris gained his membership in the PGA of America in 2011, was honored 3 times by his peers in the Utah Section PGA by winning the Horton Smith Award for education in 2012, the Bill Strausbaugh Award for club relations in 2014 and as the Golf Professional of the Year in 2016.

Chris is looking forward to contributing in a meaningful way to Wasatch High School and the young men and women who will represent themselves, their families, their high school, and their community by playing golf for the WASPS!